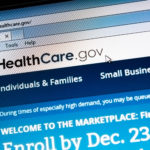 The Trump administration’s Justice dept. has filed a brief in Federal Court asking that the whole of Obamacare be struck down as unconstitutional. Although they are unlikely to be successful, if they were, it would be a major upending of healthcare in America. Gone would be protections for those with pre-existing conditions, plans would no longer offer things like maternity coverage, mental health, and wellness benefits. Also, Medicaid expansion would be stricken  which now covers people in 33 states. And, without a plan to replace Obamacare, insurance coverage to over 200 million Americans would be disrupted.